Now I know this is probably a long time coming, because the truth is Second Life has been around for quite some time already. But know this:

We’re talking huge here. Astronomical. And it’s only going to get bigger and bigger.

Second Life is in a class all by itself. Facebook’s great, Google Plus is glorious, Twitter is terrific. But Second Life? Holy cow! Holy virtual cow.

It’s a virtual world (like the Matrix with Keanu Reeves) where you can create your own ‘avatar,’ a computer-generated version of yourself, and you can walk around the whole digital world (sort of like Jeff Bridges’s Tron).

Now originally Second Life was meant to be a 3D gaming experience on a social level. You know of those MMORPGs (don’t ask me what the M-M-O-R-P-G means), right? They are virtual worlds where you get to play a wizard, or warrior, or elf, or even a werewolf, and kill other players or computer-generated monsters online. Can you say World of Warcraft? Now you get the picture.

Well, Second Life is a lot like that. Except for one thing….

This Is NOT 3D Gaming at All

Originally, Second Life wanted to set out to be the first ever 3D chat room. It scored on that. Then it got into the educational system with classrooms being held online. Crazy, huh?

Second Life has penetrated the small business arena. Think about it. 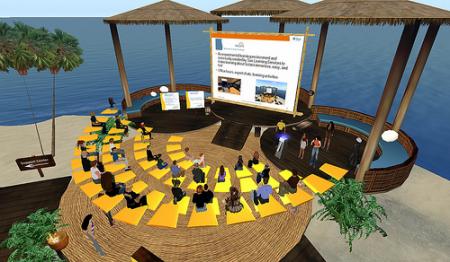 One of the features in Second Life is the ability to purchase spots of land in the virtual world. This is the crazy thing about the software — the world itself actually has its own currency: Lindens.

Now in the real world, you purchase Lindens with real money. You use those Lindens to buy your land, set up your ‘business’ or whatever it is you want (even your mansion, or house, or hut, or whatever) and even advertise within the virtual world!

You can actually buy and sell right on Second Life. It’s a consumer world made of pixels, only it has a strong bridge connection with the real marketplace. Think of it as the thread holding cyberspace and the planet Earth together.

Just in case you’re thinking this isn’t a big deal, know this:

That’s a thriving economy right there.

There’s something about a digital frontier that seems to make people a lot more comfortable to spend money.

So you do the math and figure out if your small business would benefit from having an account on Second Life….

On the Other Hand 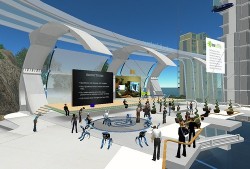 This is a virtual chat room. And there are a lot of crazies parading around it. Thankfully, there’s some security to be used, but the fact remains: it’s a lot easier to harass someone and be a complete jerk or moron online than it is in real life.

I mean, it’s not like you’ll get arrested by the virtual police (however, if you’re that much of a nuisance, your account could be suspended).

The point is this: be sparing on how you use your Second Life. It’s a great tool, but your business can succeed in the real world. In fact, that’s where it all begins and ends: the real world. The products exist here on Earth, in your hands. Period.

Technology at Its Best

The sky’s the limit with this software, though. And the best part? It’s still a free download. So figure out if your entrepreneurship would benefit from having a Second Life account. I’d say it would. The truth is you tap into a demographic that has become a relevant part of society.