There has been a lot made of the iPhone 4S in recent days. In fact, we made a lot of it right here. But one of the biggest features of the new iPhone is going to put a whole lot of extra punch in your business. It’s called Siri and it serves several purposes, all of which are going to be extremely valuable for any small business. That’s why we put this list together, in a bid to discuss the three ways that Siri can help your small business.

You’ve likely been there more than once. An event crops up that you want to keep track of–say, a three o’ clock meeting–and you’re too far from a pen and paper to do any good. Now, with Siri on board, you can just tell Siri you want to remember it. And it’s actually that easy, too; you’d just open up Siri and say “Remind me there’s a meeting at three o’clock”, and boom; Siri reminds you just ahead of your three o’clock meeting so you can make it without incident. 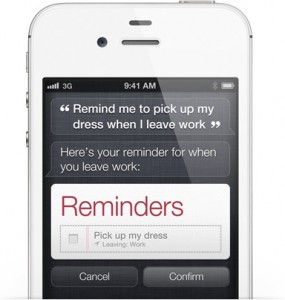 Sometimes you just want to ask a question. And while search engines have given us a whole lot to work with, there are plenty of problems. Even if you favor Boolean search styles, you still don’t always find what you want. With Siri, you can just ask what you want to find. And in a variety of directions, too–if you need to be somewhere, you can ask Siri for directions. If you need someone’s phone number, you can ask Siri to check the White Pages. And considering the sheer number of programs Siri can work with, you’ll have a huge amount of information to sift through.

Chances are you’ve at least heard of speech to text translation software, and Siri offers that service up. Siri will let you type emails, send text messages, and all with your voice. Imagine the sheer amount of time you’ll save telling Siri “Send a text message to Karen. Meet me in ten minutes. Send.”, and this doesn’t even factor in what you’ll get if you use Siri for full emails or even reports. It’s pretty universal that most people can talk faster than they can type, even for the fastest of touch-typists, and as every small business professional knows intimately, time is money. 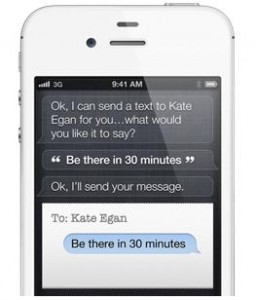 You can see that there are plenty of great applications Siri can serve, and all of them will give you at least a little extra edge in your small business. It’s not hard to recommend Siri, and hopefully, it (and applications like it) will make their way onto other platforms directly.