Now this is a novel idea, and many might not have heard of it (I know I didn’t). It’s called Tumblr. And the best way I can describe this social media platform is a ‘mobile’ blogging setup. Think of it as a mix between Twitter and WordPress/Blogger!

The Essence of Tumblr 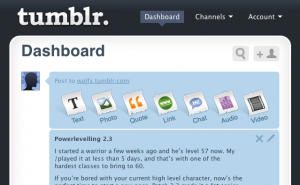 Allow me to explain. In this age of auto attendants, nothing can beat a viral marketing storm. Tumblr does just that. First off, it’s essentially a ‘weblog.’ But not just any weblog.

Of course, the traditional cyberspace term is ‘blog.’ And everyone knows that small businesses need one of those. It helps develop customer relations and marketing to have a blog. But Tumblr is so much more than that —

And that optimization is about this mantra — Less Is More. 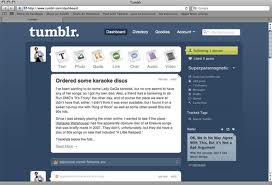 Many would call Tumblr ‘microblogging.’ That’s where the ‘Twitter’ aspect comes in. As a business owner, when you first sign up for a Tumblr account, you literally start from scratch. You can design your blog however you like. Typing in text is a breeze without all the Word document heaviness.  The interface is a lot cleaner than your traditional WordPress blog.

In general, Tumblr’s designed for optimal use. What would take maybe an hour or so to get a post going on your typical Blogger site would maybe take a good 15 minutes.

When it comes to business, time is money. And the less you spend, the more you make!

If It Ain’t Broke, Don’t Fix It

However, I’ve got to tell you — as impressed as I was with Tumblr, I really didn’t see a need for me to switch my, for example, WordPress blog. Because at first glance, there’s no way around it —

This is just a blog like all the rest!

That being said, sometimes all the heavy tools and plugins and yadda yadda of your business WordPress or Blogger site can sort of weigh you down and make you want to hire someone to operate your virtual office. That’s understandable. 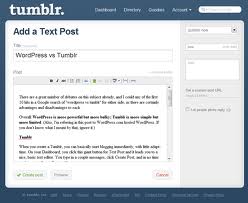 So if you don’t have a problem with your current blog, why switch?

It All Comes Down to Choice and Preference

You can make your corporate life a lot easier working with Tumblr, so it may be worth the extra effort to switch over. Yes, the Facebooks are fun, and we all love the tweets — and we’ve already set up a feed to our Facebooks and Twitters to our current blogs, so we don’t want to mess anything up.

The fact, though, remains — when you’re working with something as efficient as this streamlined social site called Tumblr, that effort might be a quickie for you! And the end result is your online business — optimized.