Nestled in the Southeast corner 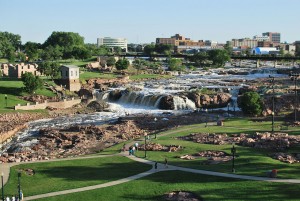 of South Dakota, Sioux Falls is ranked by Forbes as the #1 small place for business and careers. With humble Lakota Indian roots, the town now boasts nearly one-third of South Dakota’s population, with 256,100 living in the metropolitan area.

Before the boom in migration at the end of the 20th century, Sioux Falls was historically an agriculture-based industry, with the population around 80,000. However, Sioux Falls has increasingly moved toward the service industry with financial services and the healthcare sector now as the city’s booming industries.

Sanford Health is the largest employer of the city, with over 8,000 employed. Although headquartered in the city, Sanford has 280 total locations throughout the Midwest, making it the largest not-for-profit, rural healthcare system in the U.S..

Based in Sioux Falls with additional locations in the surrounding states, Avera Health is another major player in the Sioux Falls healthcare industry. The flagship Avera McKennan Hospital & University Health Center has over 7,000 employees. Avera Health is expanding in the area as well. With Avera on Louise set to open in 2020, it is the largest building project in Sioux Falls history.

Big Money in a Small City

Although Sioux Falls may not be the bustling financial center that is New York City, South Dakota holds $2.5 trillion in bank assets, a figure that no other state in the country can compete with. Part of thanks can be given to Citibank’s migration to Sioux Falls.

Citibank’s credit card operations have been based within the city after making the move in the early 1980s in response to relaxed usury laws. These laws were passed in order to make South Dakota more competitive by regulating the interests rates banks charge their customers and eliminating the cap altogether.

#1 Small Place for Business and Careers

Sioux Falls prides itself on being business positive, with business costs about 17% below national average. Sioux Falls start-ups continuously thrive amongst the city’s well-established sectors.

The Zeal Center for Entrepreneurship helps foster this innovation within the city by being an incubator for numerous startups such as Well365, a corporate wellness consultant company.

Lemonly is one Sioux Falls based startup that has found great success. Working as an infographic design company, this company has had clients from the small, such as Sioux Falls Tourism, to Fortune-500 companies like Netflix or IBM. The founder of Lemonly also had his hands in 9 clouds, an automotive digital marketing company which he founded with his brother.

With prevalent industries, numerous startups, and a cost of living 3% lower than the national average, it is no surprise why this city ranks so high in places to do business.

The city has worked hard in restoring infrastructure, buildings, and recreation in the are in order to improve cost of living. River Greenway Bike Trail, a paved section of the nearly 29-mile infamous bike trail looping around the city, is just one of the many examples of these recent improvements.

While on the bike trail, which loops around the entire city, you can stop by Falls Park, where the Big Sioux River cascades over rock formations. In the winter, this water formation freezes, causing a picturesque winter wonderland just north of the downtown area. These infamous falls have such a wonder that they have been the center for the city’s recreation through its history.

Nestled in Falls Park is also Queen Bee Mill. Founded in the late 19th century to save the local farmers shipping costs for wheat. Although mostly destroyed by a fire in 1920s, the remains of the once seven-story mill is still a reminder of the cities agricultural roots.

As a hotbed for the service industry with many prominent and up-and-coming business, Sioux Falls is a great destination for those looking to work in a business oriented area without the hustle and bustle of big city life.

Whether you want to expand your business, or begin a new entrepreneurial journey, Halloo can help you effectively manage your company’s business communications from top to bottom.