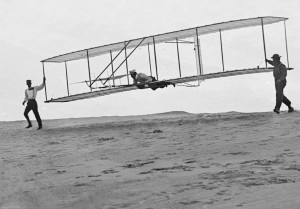 Dayton, Ohio had the highest proportion of patents per citizen than anywhere else in the U.S. Today, Dayton is a manufacturing and healthcare hub which continues to take great pride in it’s diversified economy and unique history.

While the entire state of Ohio may be known as the “Birthplace of Aviation”, it is truly the city of Dayton which helped the state earn this title.

In the early 20th century, the infamous Orville and Wilbur Wright, more commonly known in your history books as “The Wright Brothers”, invented and perfected the first powered flight mechanism in their hometown of Dayton. This was just the beginning of a long history of aviation innovation in the city.

Dayton is also home to Wright-Patterson Air Force Base. The base is a central location for aerospace and aviation innovation as the National Air and Space Intelligence Center (NASIC) and the Air Force Research Laboratory (AFRL) are both headquartered here. Top scientists and engineers in the country work from the base to continue advancing their field.

For those who want to learn more about the aviation history of the region, the National Museum of the U.S. Air Force is the place to visit. The museum houses many different military aviation crafts with sensory exhibits demonstrating the Wright Brothers local legacy with modern-day and historical military aircraft.

Leaders in the Economy

With over 2500 manufacturing companies producing $36.6 billion in annual sales, it’s no surprise that the fourth-largest city in Ohio brings in a Gross Metro Product of $41.9 billion.

The city of Dayton also encourages entrepreneurship. With light-touch regulations which foster innovation and programs like Accelerate Dayton, which awards up to $10,000 in consulting to one neighborhood business in each of the city’s quadrants, this city is all about helping grow the small business while simultaneously advancing technology for the world.

Premier Health Partners is Dayton’s largest employer with over 14,000 employees at its several locations. The hospital chain is vital to the community, as the house the regions only adult burn center and Level 1 trauma center.

Kettering Health Network is another large employer in the region. Some of the chain’s location have been around since the 1920s. Kettering and Premier, along with many other Dayton-area hospitals are estimated to employ over 30,000.

Similar to the Wright Brothers, Marxent founders the Besecker brothers are an entrepreneurial pair hailing from Dayton. Their company focuses on augmented and virtual reality for home furnishings.

3D Aerial is another Dayton-based startup that continues the tradition of aerial industry innovation by creating Unmanned Air System technology for use in industrial, agricultural, and public applications.

Tech Town in Dayton is a state-of-the-art tech facility housing many different companies ranging from health care, to communications, or even a combination of the two. For example, Match MD, a cloud-based communications system for health care providers.

More recently, Dayton was the location for the “First Four” games of NCAA’s March Madness. In this game series, the four lowest-seeded teams in the NCAA compete for a spot in the 68 team match-ups.

Traditionally, there were only 65 teams competing in the March Madness series. However, once the games were expanded, the First Four can likely bring large crowds to University of Dayton Arena, as the teams playing are typically poorly-performing teams from large schools.

Whether you have your hands in the manufacturing, healthcare, or aviation and aerospace fields, Halloo Communications can help you manage your small-business communications on every level.