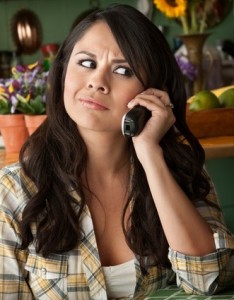 In telecommunications, spam can come from more than just an email service. It can also be phone calls received from robocallers. Often companies that use such systems have purchased a list of phone numbers of potential customers or use a random number dialer, and call them at will, with no prior authorization to make that contact. Essentially, it is the same as the unsolicited emails that we term spam, only worse, because they usually call at the worst possible time.

A quick look up of robocall in the Merriam-Webster Dictionary states that the term originated in 1993 and is, “a telephone call from an automated source that delivers a prerecorded message to a large number of people.”

YouMail created a Robocall Index that tracks the number of robocalls generated across the nation. In a recent article in the Cision PR Newswire, YouMail stated that robocalls had spiked 41% in the first half of 2018 in comparison to the same time period last year.

The organization stated that more than 30% of the robocalls made in July were scams. This was an increase over previous months, in large part because of an increase in scammers making multiple calls to individuals from different numbers and an upswing in calls from telemarketers that would more appropriately be considered scams.

How Can You Reduce Robocalls Using Halloo?

Halloo account administrators can combat spam by blocking calls from specific phone numbers or prefixes. This feature is located on the side bar “Call Blocker” under the “Extensions” tab in My Halloo.

To add and edit blocked numbers, remember that phone numbers must be entered in international format, and include the country code.

When a call is blocked, the caller will get a busy signal and not show up in the call log. Call blocking applies on an account level to all direct inward dial lines (DIDs) equally.

In your voicemail system, you can opt to require callers to “Press 1″ to leave a voice message. If the caller is a real person that wishes to leave a message, they will follow the instructions and press 1. But, the robocaller will not, and the system will hang up on them. This feature can greatly reduce the number of nuisance messages.

To access this option, go to “User Settings” -> “Voicemail”. Select “Caller must press 1 to leave a message” to enable this feature.

Future of Robocalls and Robocall Blockers

It doesn’t appear that there will be a decrease in robocalls any time soon. In fact, these types of calls have quadrupled in the last few years. There is some hope on the horizon though. Researchers may have found a way to protect users from spam calls, according to an article in Inverse. There is an app, CEIVE, in the works that can detect spoofed caller ids.

Current methods to identify robocalls generally are based on a pre-existing database and protection provided by call rerouting. This new app would include a “signaling protocol to identify imposters using the most common tools with perfect accuracy.” If a deceptive call is detected, the user would be notified using a push notification.

While the functionality of this concept app has been tested with major U.S. cellular carriers, there are still ways that the protocol can be fooled. Researchers are working to resolve these issues as well as searching for partners, like Google, to help develop a user-interface for the app.