While most navigation apps focus on getting users from one place to another in their cars, Take Me To My Car will instead focus on another critical route: the distance from where ever it was you’re going to your car.

Take Me To My Car essentially does what the name implies; specifically, it shows maps in rather short ranges, focused on two points, one from a particular point and the second from your current location. Basically, with just one tap, you establish your car’s location on the app’s GPS capability. Then, from there, you’ll be able to see your location, your immediate surroundings, and the relative location of your car. You’ll have the ability to browse the map, or zoom in and out with pinch zoom. 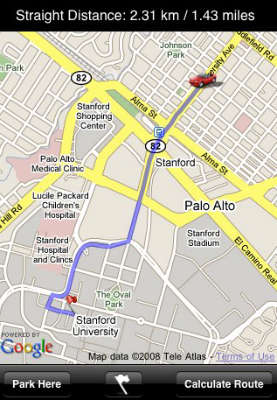 While the most immediate use for such an app is to locate an errant car in a parking lot–one user reportedly managed to use this app to get to within nine feet of their car, an achievement for any GPS system–there are also plenty of other uses for something like this. Any function that would require the setting of a “base camp” location, and then ranging away from said location with the intent to return–flea markets, outdoor shopping, golfing, and the like–would profit from a system like this. Consider the value of something like this in, say, an indoor mall, or in an office building with a variety of tenants. Whether it’s used to return to a car or to move throughout a building or a field, it’s got a lot going for it.

Of course, there are down sides here. Sure, it’s free, and a nifty idea, especially for those with iPhone 5 models who are looking to easily move around. But the interface isn’t exactly the easiest thing to work with. It will likely take some getting used to–the simplicity of the controls actually contributes to this a bit as it’s not exactly easy to see just how to do these things–but once you get the hang of it, it works reasonably well. 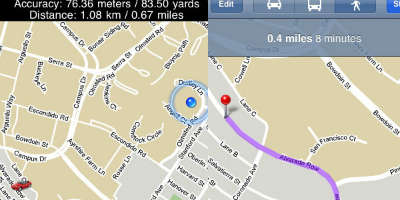 While it’s always good to know where you are, it’s not just knowing where you are, but knowing how to get a hold of others that’s going to take small business to the next level. Cloud-based telephony tools like call answering services and call recording features will not only improve the number of calls that get fielded, but ensure that those calls can be addressed exactly as they came in, complete with a note of security on the process.

It’s specifically designed to work with 3G iPhones packing at least iOS 3.0, as non-3G iPhones don’t have GPS so well. This is why it’s not an app that will work well on iPod Touch, as it’s not a supported platform. Still though, considering that it does all of that for free, well, that gives it a lot of extra punch. Take Me To My Car may not be the best app for the position, but it certainly will do nicely when it comes to short range navigations through dense environments.