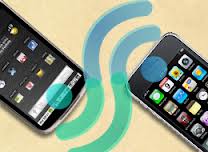 It sounds like a new federation of football players? No. NFC stands for “Near Field Communication,” a standard in technology allowing any mobile device to tap into all forms of communication in real time. Hopefully that doesn’t fly by your head a little too fast, but I’ll illustrate for you —

Using your mobile device as a credit card. Or as an online gaming device. Or even using your smartphone as the actual “ticket” to get you into the next Justin Bieber or Big Time Rush concert.

Doesn’t sound like much, but when you can do that in the middle of a beach without a mobile hotspot or WiFi connection, I’d have to say that’s pretty cool! That’s NFC for you. It’s Bluetooth, supercharged.

In essence, consider it a short-range frequency technology allowing any devices to communicate content by simply being in the same room. No having to log in to a network, no syncing anything. It’s quick, easy, secure. For the first time, you can pay your bill at a restaurant simply by swiping your…phone? Yes, phone. Or tablet, if you will.

The Big Question of the Day: the iPhone 5

There’s no doubt that small businesses, call centers, and entrepreneurs scream with joy at the sight of the iPhone. It’s undoubtedly been the number one smartphone for homes, businesses, and even an 8-year-old girl wearing cute boots (when I was that age, I played with Legos!).

Surprisingly, though, iPhone’s missed out on some features that have become standard in other devices and operating systems. NFC happens to be one of those features.

You’ll find NFC technology in just about any Android capability. Google loves it. Take a look at Google Wallet, for crying out loud. Many smartphone manufacturers, too, have embraced the power of Near Field Communication as well. Even MasterCard utilizes it.

Surprisingly, though, Apple has gone hush-hush and no-no on the NFC front for some time now, but there’s a bit of buzz that the iPhone 5 might include the technology, although it may be nothing more than a mere rumor.

Why all the buzz, though? What’s the big deal? First off, let’s look at digital technology and what it could mean for NFC….

The Possible Benefits of NFC

We’re already seeing it on a wide scale. But imagine businesses passing out coupons with a simple swipe or tap of an iPad or iPod or iPhone. Scanning at its cleanest. People could walk up the door of a business and get a coupon showing up on their digital device before even passing through the threshold.

Can you say “marketing genius”?

Moreover, understand that you’re dealing with an operating system, the iOS system, that’s undoubtedly fast and reliable. iPods are insanely fast and convenient, compatible with just about any app, and the iPad has to be the fastest mobile computer never needing a briefcase (like a laptop or netbook does) ever in existence.

NFC would benefit Apple users in business more than I can imagine.

Let’s Hear What Apple Has to Say, Though….

They’re not so optimistic, though, the iFolk are. Wonder why they haven’t utilized NFC like any of the other big boys in the field? Because it’s still a relatively new technology that could otherwise be somewhat insecure. Think about it.

We’re talking about money here. Using a phone as a credit card or debit card? Crazy idea. And 0ne that could raise some questions. Infrastructures for NFC are still sketchy at best, at least in the eyes of Apple. They’ve even debuted an app designed to “store credit cards” as a means to make payments with the use of their digital devices, an app entitled Passbook. It’s not NFC, but it sort of works like it.

In a nutshell, Apple’s taking its time with introducing the new technologies out there, waiting to see how all of it will develop. And for many, that may be a smart move. Needless to say, it hasn’t hurt the small business or entrepreneur loving their iPhones and iPads, but sooner or later you have to see the technology hop on board at some point, right?

Because very soon, the train may just leave without NFC boarding, and the loser may be Apple. You know what would be the bigger losers, though? Businesses.

What do you think? You think Apple should unveil an iPhone 5 with NFC capability? Or should they take it slow? You be the judge….